Kosta and Titania are proud to present

, a project that was born 2 years ago in Nepal.

We are a young couple that had the idea of an app capable of displaying the map using the same point of view as ours. The idea came to us while we were trekking on the Himalayaâ€™s. We realised that even though we had a compass, a map, a GPS and a smartPhone, it was not easy at all to be sure that what we were seeing on the map, was what we were seeing with our eyes. Most locals could name the tallest peaks around us, but when it came to the less known peaks, there was a lot of disagreement.

We believed in this idea and decided to concentrate all our efforts to develop this application. Kosta conceived and programmed the application and Titania took care of the design and the marketing. 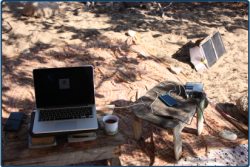 This is an app we have conceived, developed, implemented and financed ourselves. Throughout this period we settled up our desk in several places and kept developing while traveling. Solar panels and a 3G internet connection gave us the possibility to work in remote places.

will inspire all beings that believe in their dreams to go for it.